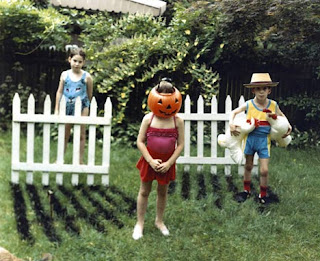 Her work is in the collections of the Museum of Modern Art/NY and the Metropolitan Museum of Art/NY, and is shown in galleries and film festivals around the world. 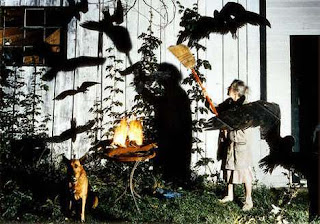 Here's a sample of her wonderful series, The Back Yard. As Chris writes, "The 'Back Yard' series of color photographs was created over a span of twelve years, in various locations in Queens, New York.
The original negatives went missing before fully completed editions were able to be printed. What existed of the original printed series was unfortunately limited and for the most part, the work had been filed to memory.
Recently, a large number of the original negatives and vintage prints have been recovered. For the first time in fifteen years, a completed edition of the 'Back Yard' is now available for exhibitions and sales. 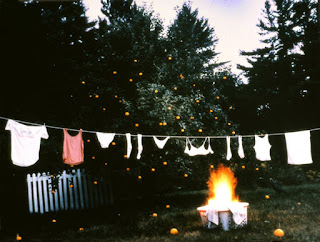 [The photographs] take a humorous look at the compact worlds and eccentricities created by the human presence within these tiny plots of Nature. Each image is created by incorporating specifically constructed outdoor installations within existing environments which disintegrate over time and Nature. Working with a sensibility as much akin to painting as photography, the photographed environments are manipulated and enhanced on site with painted light and shadows, bright colors, exaggerated flora and fauna, carefully positioned props and live presences. Mysterious tableaus of fractured narratives transform common backyards into personalized, emotionally charged hyper-realities built of childhood memories and adult longings. At once eerie and familiar, the photographs offer a timeless glimpse of an American scene.

All photographs are chromeogenic prints. The images are not painted upon or created with the use of computer manipulations or digital enhancements." (The boldface is mine) 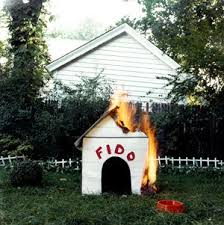 From an article published by the San Francisco Examiner  for the show "The Backyard",
that I saw last year at the ArtHaus gallery. "They are whimsical avant-garde installations: chromeogenic prints in which models are often headless or wear masks, garden hoses become electric neon snakes and artificial light makes fake shadow birds take flight. Schiavo incorporates objects grabbed from neighboring yards, paints the ground, paints living leaves, manufactures unnatural shadows, all to make the real unreal. (...) A Surrealist influence is palpable: 'Fido' was conceived in a pre-dawn dream. Schiavo went out into the yard, arranged the image she wanted, took the photo of the flaming dog house and went back to bed. Schiavo abandoned The Backyard for a while, working on film and sound projects. With the advent of Photoshop in 1990, she found that many people assumed her striking, dreamy images were digitally enhanced. 'People weren’t getting what I was doing,' she says. 'So I thought, what’s the point?'

Well, have a look here and judge for yourselves!

On Chris's website you can also watch her film works. She is currently working on a silent cinematic fable called "Rivetgirl", which premiered its first two chapters at the Museum of Modern Art, NYC, in 2007.