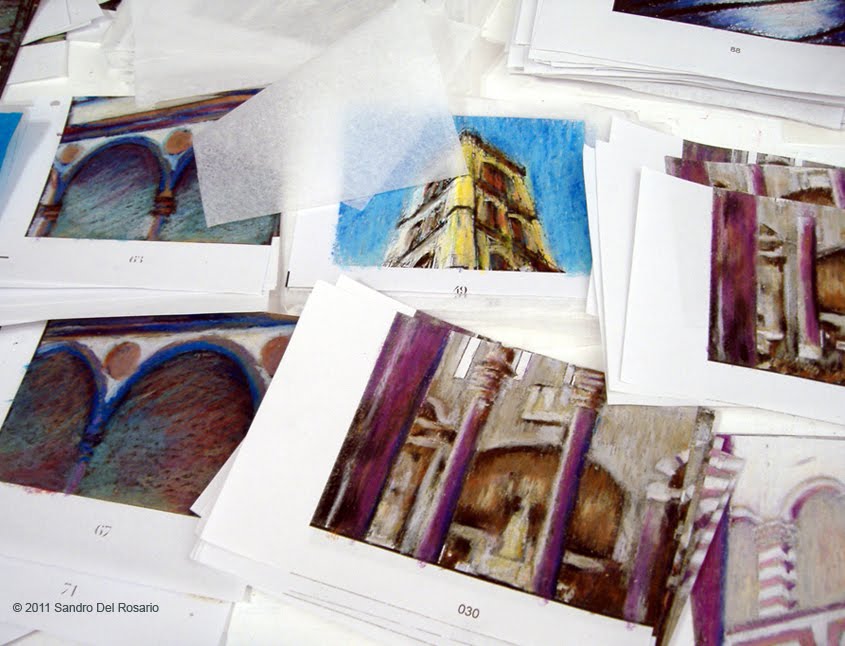 Sandro Del Rosario is an Italian born filmmaker who currently lives in LA (because he loves the weather*). His work has received numerous awards and has been screened worldwide, including the MOMA and the Lincoln Center in NY, the London Film Festival, the Rotterdam Film Festival and the Annecy Animation Festival.
Shortly after he got his MFA in Film/Video at CalArts, in 2001, Sandro completed his 16mm, b/w, experimental film L.City, which is an extremely beautiful and moving work of art. You can see a demo reel of it on Sandro's website: http://www.sandrodelrosario.com/ Sandro is currently working on Lo Sguardo Italiano ("The Italian Gaze"), a unique 16mm animated experimental film made with thousands of oil painted photographs. As he writes in the blog http://losguardoitaliano.blogspot.com/ (where you can also watch a beautiful trailer) where he follows the progress of the movie, "Lo Sguardo Italiano is a unique, independent art/film project, that uses frame by frame animation (...) The estimated total number of frames needed to complete the film are about 5,000." The film has a direct link to the Artspire website (http://www.artspire.org/DirectoryDetail/tabid/95/id/376/Default.aspx), a new database of artists and projects linked with the New York Foundation of the Arts, where you can view another trailer and make a tax deductible donation to help Sandro's dream come true. "Lo Sguardo Italiano," writes Sandro, "is a short, animated film, which expresses the contrasting realities of contemporary Italy where I was born. I feel I must create a work, handmade and experimental, which will picture both the inherent beauty and history of my country and the anguish for its contemporary political, moral and economical decay. Words, live action and animation of oil painted landscapes as visual metaphors of my sentimental memory will be edited to express the two themes of the film: the rapture for the beauty and the aching for the destruction of this beauty. Lo Sguardo Italiano hopefully will be a poetic and lyrical work

in experimental animation, and a true interdisciplinary work of art. The project began in 2005 in Italy during a residency at the Bogliasco Foundation in Genova, painting with oil pastels thousands of photos and stills from videos previously shot, one at the time. Those images will be filmed again in 16mm and video, frame by frame, recreating movements and transitions in animation. A script of my thoughts and reflections about Italy will be recorded and edited to appear intermittently with the images and sequences of gestures and close ups of my hands, materials and images. Like in a poem, there will be an open association between words and images, and some written text will be used as an integration of the audio."

* Sandro would like me to add that he loves not only the weather, but the whole city.
Pubblicato da Silvia Pareschi a 11:50