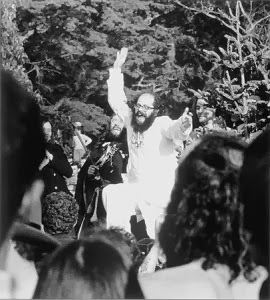 "It was the Human Be-In, the January 14, 1967, celebration that was billed as a coming together of every tribe in the new, emerging America: from legendary beats, to Berkeley radicals, to the San Francisco love generation. 'For ten years a new nation has grown inside the robot flesh of the old,' proclaimed the event's starry-eyed press release. 'The night of bruted fear of the American eagle-beast-body is over. Hang your fear at the door and join the future. If you do not believe, please wipe your eyes and see.'
Years later, some would call this event the true - if belated - beginning of the Sixties. More than twenty thousand people poured into the Polo Field that sun-dappled Saturday, on the wild west side of Golden Gate Park, where a swaying curtain of eucalyptus and Monterey pine trees shielded the tribal gathering from the raw ocean winds. Onstage, Allen Ginsberg - wearing white Indian pyjamas and garlands of beads and flowers - looked out over the vast human dynamo that he had helped ignite and turned to his friend, Lawrence Ferlinghetti: 'What if we're wrong?'


From Season of the Witch, by David Talbot