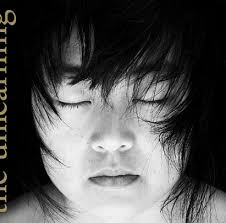 Theresa Wong is a cellist, vocalist, composer and improviser whose work encompasses music, theater and the visual arts. Her training in classical music and design fused during a fellowship at Fabrica Center in Treviso, Italy, where she recognized the possibility of creative performance through encounters with Lawrence Weiner, Koichi Makigami and Alexander Balanescu. (She also, as she once told me in her good Italian, recognized the deep similarities between Chinese and Italian people: food, chaos, mafia and family. And she also became a big fan of the great Italian singer Mina, to whom she dedicated, "with ecstatic admiration and deep affection", her own version of Fabrizio De Andrè's La canzone di Marinella, that you can hear here.)


Hearing Theresa perform is a really unique experience, where her astounding use of voice blends with the cello notes in a way that makes you feel light and suspended in space.
Her current projects include: O Sleep, a  "multi-dimensional improvised opera which focuses on the synthesis of improvised and composed music, text, movement, video and use of architectural and natural space in performance" and The Unlearning, "a collection of miniature songs for violin, cello and two voices inspired by the Disasters of War etchings by Francisco Goya. (...) Recorded as a duo between myself and violinist/vocalist extraordinaire Carla Kihlstedt, these pieces are in the final stages of production to be released on Tzadik Records [John Zorn's label] in Autumn of 2011."

Her numerous collaborations include working with dance visionary Anna Halprin to perform a leading vocal role in the performance Spirit of Place. She is also a cast member on cello, voice and piano in Carla Kihlstedt's Necessary Monsters theater project, and since 2007 she has been collaborating with composer, sound artist and inventor of the [amazing!] Long String Instrument (LSI), Ellen Fullman (see photo). (Theresa appears in Peter Esmonde's poetic documentary-hommage to Ellen's work, 5 Variations On A Long String, and Ellen's expansive LSI is also a central component in the improvised opera, O Sleep.)


You can listen to some samples of Theresa's music on her Myspace page, and you can find more information, music and videos on her website.