Rosemary McGuire is a sweet and tough woman, with a biography that's really worth recounting. She was born in bush Alaska, second of four kids in a cabin with no electricity or running water. Her father was a commercial fisherman. When she was eight, the land they were living on was designated mining territory, and they had to abandon their cabin. The McGuire family moved down to the coast, where Rosemary grew up. She started school at the age of 16, in Haines, Alaska. The following year, she left home, spent a year living in Europe and then entered college. She has worked as a fisherwoman for the last 10 years, and has traveled over much of the high Arctic, often solo. She is currently finishing a collection of linked short stories.
Rosemary writes about the world of Alaskan fishermen (and women), and her stories are intensely situated in a world that we seldom see at all. Her language is very powerful, being able to convey the "salty" taste of the place and to poetically evoke the internal life of tough, monosyllabic carachters.

Here's one of her beautiful stories, Innocence. 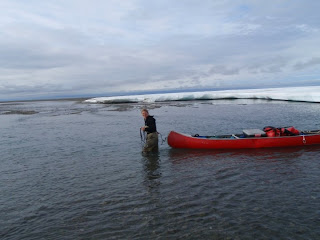 Luke’s body stretched out, hot, uncomfortable, the aluminum grid of the skiff ridging his back. Light poured into the bowl of the lashed skiff, and on the deck of the seiner below. The boat rocked to a steady chop that stung cold and salty along the side. Overhead, the boom creaked back and forth, moving a fraction of an inch each way before jerking tight against the rigging. A steel beam, familiar to him, so familiar he could feel its coldness, its blistered paint, against his palms without thinking of it or knowing he was doing it.
A line snapped up from the deck. Curled and disappeared. The other deckhand, horsing around. Pete had this idea he could learn to tie a bowline in midair. It was crazy irritating.
“That was weak, dude,” Luke called lazily. No answer.
Five hours still to Noyes Island.
If he raised up in his seat even a fraction the wind struck him, driving out the warmth. The sea was so bright it hurt his eyes, the islands too sharp a green and blue. Better to lie, drunk with light, his eyes closed against the sun, watching through the liquid curtain of his eyelids.
Thinking of Eva. He rolled over to conceal a sudden embarrassing hard-on, though there was no one in a position to see. If there was a girl on board….but there wasn’t. Jim’s daughters were too young.
If Eva was on board….he cramped up again with a gust of desire. Eva here, her small round butt bent over the sink. Eva’s flat little boobs in raingear. But Eva would never do that.
The line snapped up again, twitched against the sky and disappeared.
“Weak…”
“Shut up.” Pete’s grinning face lurched above the skiff wall and vanished, crepulous with red hair.
Four and a half hours to Noyes Island.
Overhead, he heard Jim’s shout. His wheelwatch. He dropped swiftly down on to the deck. Up in the wheelhouse, Jim stretched out, heels on the console, steering with one foot.
“Just keep her as she is,” he said. Luke slid into the seat. And Jim stood up, adjusting himself, stretching, yawning, looking out over the stern.
“Nice day,” he said. “Hope the weather holds.”
Luke nodded. 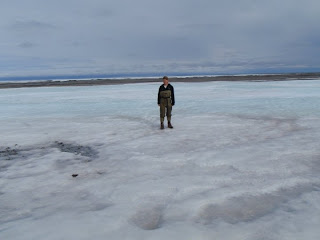 “You’re gonna want to call me when we hit that island up ahead,” he said. “I’ll make the turn.” He dropped down out of sight into the galley, easy in the plain authority of unquestioned intelligence. “We’ll get in behind it, check on ‘em before their pussies start hurting too bad.”
His head disappeared. Luke cued up the music. “ .. aa ah m,” the vocal-less rhythm seemed to shake the dusty, cigarette air of the wheelhouse. He pushed the window open. An albatross rode the air off their bow, the greyish kind. He felt a little sick now, in the enclosed space. The boat jerked against the chop, jerked like a dog on a leash. Whoops. Crash. Whoops. Crash. Again and again.
On the radio, far off, he could hear two men talking, first about their sets… “Gotta thousand on that one.” Longliners maybe. Then, “Gotta go make my baby. ..You should see the size of it….nothing worse’n a chili shit...”
Disgusted, he flicked the channel up, but the other channels just held static. He went back to the original; it scanned between 8, the chatter channel, and 16, for the Coast Guard. “Attention all mariners, attention all mariners. …navigational hazard….” But it wasn’t anything, only some logs reported drifting back in Cross Sound. Hazard for the pukers. Not for them. Though sometimes drift from the logging barges choked up the tiderips heavy as popweed.
He sighed, and shut it off. Four hours. He wondered how the others were doing down there. Where they were bound.
The sun rolled down the horizon overhead, touched the flat blue line of open ocean, seemed to swell and bleed outward. Shadow swept across the surface of the water, hollowing the sea; then as the sun sank further, the air seemed to thicken. The water held the last light like a liquid substance, dense as mercury, glowing back up at the paling sky. No land now anywhere in sight. Even the mountains had disappeared in the hazy air of evening.
Luke heard the galley door clang shut. Pete coming in, starting dinner. The smell of Eazy Cheez and chili—they were sick of that. Burnt coffee. Popcorn. The four food groups.
Jim’s snore, from the daybunk just below the hatch.
The fourth guy, Charles, had flown ahead.
Luke settled back, tried to think again of Eva, but it was no good. Though she was always somewhere in his mind, lately when he tried to think of her directly he got depressed. It was something about the way she hung on him, and something about the men in the hold below, with their air of purpose larger than themselves. He lit a cigarette, though he knew he shouldn’t, and blew the smoke slowly out the window. It met and mingled with a denser cloud, the exhaust blown forward from the stack, and the sooty drifting from the oil stove. The wind had changed, setting against their stern.
He leaned forward. Looked out on the back. Something seemed wrong.