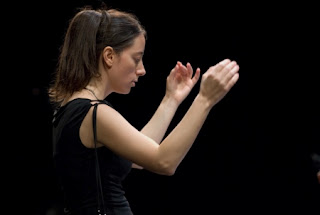 Laura Andel was born in Buenos Aires, Argentina, where she grew up. After living, studying, and performing in Buenos Aires, where she also received a degree in Tango performance, Laura moved to Boston in 1993 to pursue studies in composition. Since then, she has focused mainly on composition for large ensembles and developing her own conducting as part of the compositional process. In New York City, where she now lives, Laura created the Laura Andel Orchestra, a large ensemble that features an unusual combination of instruments and unites musicians from diverse musical and cultural backgrounds that perform her extended compositions. Currently, she leads the Laura Andel Orchestra in several formations. Among the most recent are the 14-piece SomnambulisT Orchestra, the 10-piece Electric Percussive Orchestra, and a 9-piece format which includes bandoneon, piano, Fender Rhodes, double bass, cornet, clarinets, viola, vibraphone, and Gamelan instruments.

Her music recorded and released on CD includes:

SomnambulisT (Red Toucan Records, 2003), recorded with the Laura Andel SomnambulisT Orchestra. "[...] this minimalist orchestral project is one of the most impressive large ensemble recordings that I have heard in quite some time. [...] The more I immerse myself in Andel's sonic universe, the more extraordinary I find it." (David Lewis, Cadence Magazine)
Here's an excerpt: http://www.lauraandel.com/WhaleSinging.mp3

In::tension (Rossbin Records, 2005), recorded with the Electric Percussive Orchestra. "[...] Eerie morse-code like percussion, mysterious processed vocals, layers of odd electric guitar sounds and two pianos submerged in the waves of turbulent waters. [...] Laura does a fine job and controlling the subtleties and balance, as different instruments float amongst the ghost-like spirits that wander through the entire work [...]" (Bruce Gallanter, Downtown Music Gallery)
Listen to an excerpt here: http://www.lauraandel.com/Noticias.mp3

Doble Mano (Rossbin Records, 2009), recorded with the Laura Andel Orchestra. "Completely inured to the challenges of contemporary composition, (...) Laura Andel writes pocket-orchestra pieces in which notated sounds blend with improvisation, as staccato and lyrical passages vie for supremacy. Doble Mano, whose title reflects the twinning of different orchestral groupings, raises the ante further by interjecting into the performance characteristic sonic fragments from the South American bandoneon and Indonesian gamelan." (Ken Waxman, JazzWeekly.com).
-
Here, on WQXR, you can listen to a sample from Doble Mano and one from Apsides, with some interesting Notes from the Composer.
Here you can listen to an interview on New York Public Radio, for the show "Ear to Ear" hosted by David Garland, where Laura explains the music and shows different samples from her last 10 years.

And here's Laura's website, where you can get many more information and listen to more music.